I. But isn’t the reality of the current political climate in US politics that Republicans don’t want a compromise? Think of legislation or hearings on infrastructure, voting rights and the January 6 insurrection that the GOP is hindering or even trying to block.

Good exceptions are senators like Sasse, Romney, Collins and Murkowski who are not held hostage by the radicalism of former President Trump, but are powerless in their party.

The Fox Business reporter tries to seduce the senator in a direction in which he appears to prefer to stay away. But Senator Cramer also cannot escape from Trump’s grasp, which overshadows all reasonableness and nuance and is proclaimed daily in the media by his minions. Like this Fox’ ventriloquist.

If President Biden is not in control himself, but operates in a team of skilled people (think President Kennedy’s The Best and the Brightest), then this is no less true for former President Trump, who was guided by the Kremlin and his business interests abroad.

Trump’s attitude bordered on treason. This cannot be said of President Biden, who allows himself to be convinced by fellow party members and fellow countrymen. Or not. Trump was whispered by Russians, Ukrainians, Turks and Azerbaijanis who wanted to undermine US power and Trump helped them. Trump was blackmailed by President Putin and the GOP made it happen. Perhaps this Fox journalist can take a look at that with his selective look.

II. The Biden government’s problem with Nord Stream II is not its relationship with the Russian Federation, but with Germany. President Biden and Secretary Blinken need Germany for their Europe politics. After all, Germany is the most important member state of the EU. Even more than before due to the withdrawal of the United Kingdom from the EU.

I agree with Senators Cruz and Shaheen’s 2020 law to extend sanctions to companies working on Nord Stream II construction. But the effect of sanctions is limited. The EU Member States have their own autonomy and the US cannot impose its will on other countries.

Certainly because of the Wild West diplomacy of the Trump administration, relations with the Western allies have soured. The Biden administration is now trying to restore that, but former President Trump has caused a lot of damage. That is why it is now so difficult for the US to get the Europeans on its side because they can no longer trust US politics because of its fickleness, unpredictability and bluntness.

This attitude also contradicts the 2019 EU Energy Base Document (Third Energy Package) on energy dependence and diversification. The construction of Nord Stream II contradicts this.

The construction of Nord Stream II also ultimately contradicts the Paris 2015 agreements on the climate. This became concrete this week when in a Dutch lawsuit the Anglo-Dutch company Shell was obliged to reduce CO2 emissions by 45 percent compared to 2019. The exploitation of new sources of gas and oil does not fit there. Likewise, Nord Stream II is now becoming obsolete by the mental and legal conditions of the present time.

IV. What the US Congress can do to stop Nord Stream II is to show understanding for the Biden administration to keep relations with Germany right. Furthermore, stopping Nord Stream II should not be linked to the pitching of the own LNG industry. That only plays into the hands of the opponents who are under the control of the Kremlin and is experienced as too simple. The US should not show power, but solid arguments that the EU can live with.

Nuance is more difficult than childish party politics agitating against Biden. This is of no use to both the US and the EU. The EU is well aware that dependence on Russian gas is a strategic weakness that can be blackmailed into the future.

But, as in the US, it is investors and companies that are committed to economic cooperation with the Russian Federation that largely determine policy. Senate members would greatly serve the US, the EU and their own credibility if they put diplomacy and international cooperation back on track. And do not let themselves be guided by the interests of the companies that buy politics.

V. The Biden administration is trying to find a way around that. It would grace Republican members of the Senate if they realized that and acted on it. Through consultation and the joint search for a way out of the complex Nord Stream II dossier, which should in any case not strengthen the strategic position of the Russian Federation. A joint approach by the US with the main stakeholders Germany, the Netherlands, France, Austria, Poland, the Baltic countries and the United Kingdom must be the aim.

So Congress should leave the squabbling of American partisan politics in the debate with Europe. That is only laughable and confirms the old image that Europeans already have of Americans as uncivilized peasants.

The Fox journalist with his simple framing lacks the level to get that debate started. On the contrary, his sole purpose seems to be to destroy it. In his stupidity, he does not even realize that with such an attitude he is serving an enemy of the US: the Russian Federation. Exactly, the friend of former President Trump. 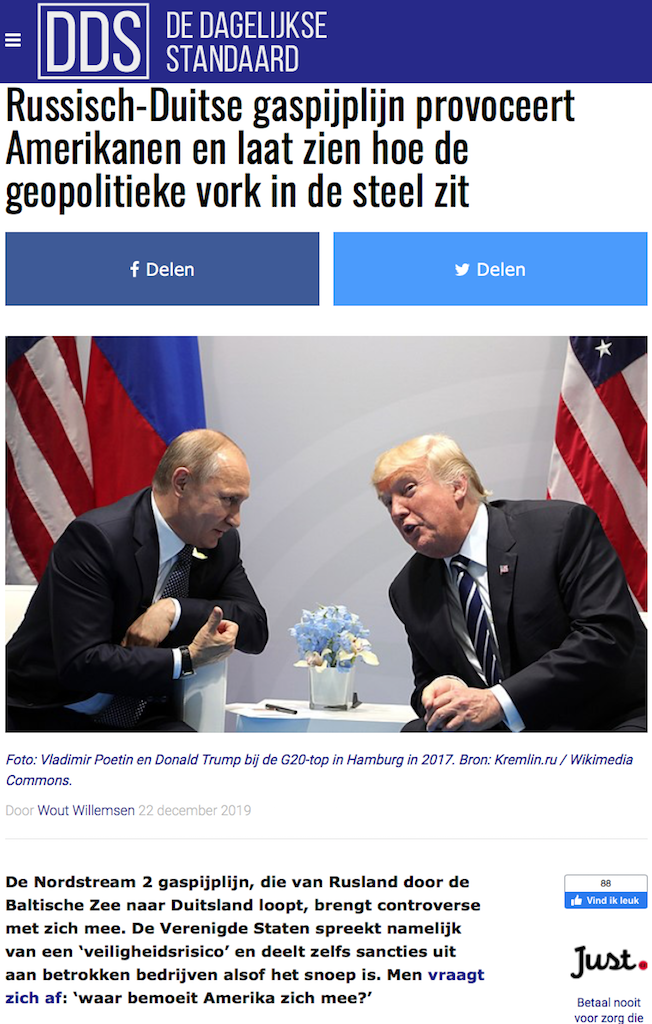 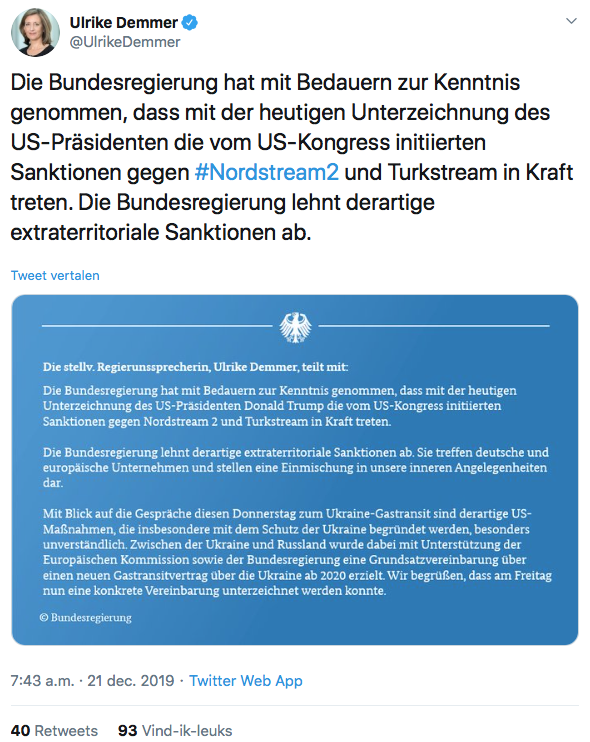 It is nice what you say, Senator, but you know what the real problem is. Namely the relationship between President Trump and the Kremlin. Trump follows the talk points of the Kremlin closely. Trump defends the interests of the Russian Federation harder than those of the US.

The role of Germany remains underexposed in the video. This country plays a splitting and malicious role within the EU. That even goes so far that the German embassy in Washington, as the direct mouthpiece for the Kremlin, urges the Trump government to postpone sanctions against Nord Stream II, Gazprom and the Kremlin.

Because Trump is doing the Kremlin bidding, it is not to be expected that he will seriously impose sanctions against the construction of Nord Stream II in 2019. Even if the Congress has decided that by a large majority. So if you want to implement those sanctions, then you have to dismantle Trump’s opposition. For example, by organizing a veto that overrules Trump’s pro-Kremlin attitude.

If you do not go too far and tackle the core of the problem, namely the obstruction of Trump, then you know that you are working cosmetically by playing nicely on social media with your indignation about that perfidious Russian Federation and that hesitant and uncertain EU.

Do you dare to tackle Trump? Or are you afraid of that?

The construction of Nord Stream II is wrong in two respects. 1) It increases dependence on fossil fuels in the coming decades, while the climate problem requires the opposite; 2) It is contrary to the official EU policy on energy independence and diversity as laid down in the ‘Third Energy Package in the gas sector’ in 2018.

2) According to its own energy policy, the EU has decided to diversify in 2018 and not to depend on a specific provider (in this case the Russian Federation), but does the opposite in practice through cooperation with Gazprom and Nord Stream II. Despite its own policy, the import and dependence on Russian gas has already increased. If the EU takes itself seriously, it should work better and more coordinated with providers other than the Russian Federation.

3) Again, the dependence on Russian gas contradicts EU policies. This has to do with geopolitics and the Kremlin, which in the past has turned off the gas tap for political reasons. That makes the EU blackmailable for a Russian Federation that is economically weak and politically unstable. No single power block that itself takes seriously must make itself dependent on others.

The short-sightedness of German politics and business is particularly high. Let DW pay attention to this. The German policy on Nord Stream II is the result of an explosive combination of short-term economic thinking with a misguided sense of guilt over the Nazi past and contemporary arrogance. 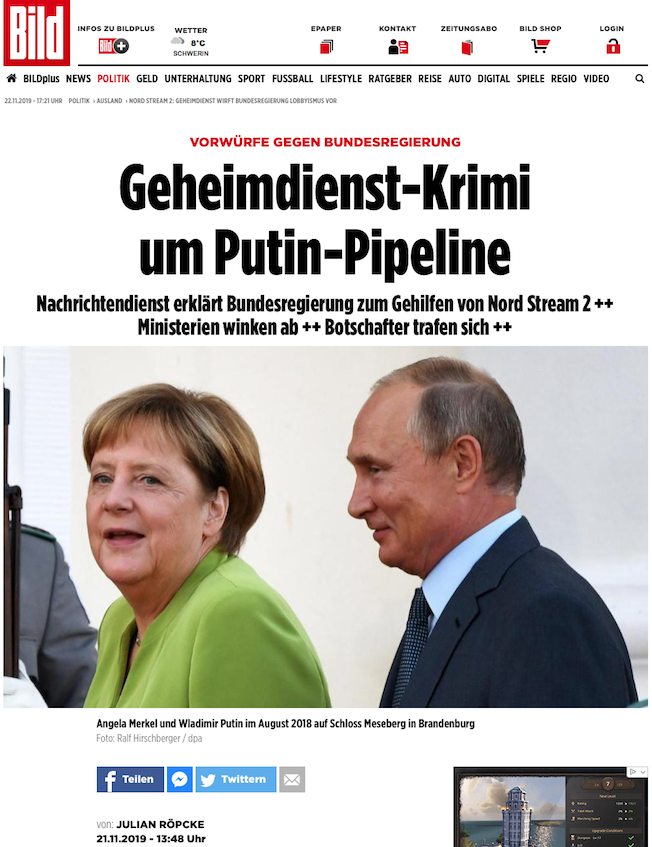