The cat is out of the bag on the website of the Gergiev Festival that will start tomorrow in Rotterdam and lasts until 17 September: ‘The world-renowned maestro Valery Gergiev and Rotterdam have been inextricably linked for over 25 years. Since 1996 the Gergiev Festival has grown to become an international brand that is synonymous with Rotterdam. It offers an executive-level, international podium for the business, local government and politics worlds in Rotterdam, with numerous networking opportunities. It also provides the city with a unique cultural profile.’ Classical music as marketing, classical music as a lubricant for business. The Gergiev Festival comes straight to the point what it sees as its greatest achievement: networking in the margin at an international level. But the organization of the Festival has a sinking feeling about the cooperation with maestro Gergiev, because sponsors are not mentioned. That Gergiev Festival takes place behind the scenes.

But it is a misunderstanding it provides Rotterdam with a unique cultural profile. It does, but, different than the organisation suggests. The Gergiev Festival is increasingly criticized for political reasons and has no positive impact on the international scene. Conductor Gergiev is a political ally of President Putin. He is deployed within the Russian propaganda apparatus. Valery Gergiev in 2017 is Gustav Gründgens of 1941, an opportunist in a wrong regime. This is still the logic of an authoritarian regime where power is divided differently than in the Netherlands. But why Rotterdam’s business, local government and politics extrapolate that to Rotterdam without distancing themselves from Gergiev and Putin is inexplicable. A regime that puts pressure on human rights and European security to such a great extent. Why are Rotterdam’s business, local government and politics turning a blind eye and are they unable to end the relationship with Gergiev?

Nobody has to be against artists who express themselves politically. Wittingly or unwittingly they are always made part of an ideology, party or higher purpose. But the statement ‘politics and art have nothing to do with each other‘ is not correct. It is a lie to avoid responsibility. The soft power of art is all about politics. Or by active attitude or by accepting the existing power that is confirmed by politics. The latter only looks more passive than the first, but actually comes down to the same. Consciously looking away is what Rotterdam’s business, local government and politics do.

How is it possible that the awareness of the political role that Valery Gergiev plays in the Putin regime is so small in Rotterdam? What mechanism is working here? Is it more than just looking away and ‘business as usual’? In countries with a larger Ukrainian community like Germany, the US or Canada it is different. Along with Russian dissidents, action after action is taken against performing artists including Gergiev, Anna Netrebko and other icons that actively support Kremlin’s politics. They are under fire and have to defend themselves. But in Rotterdam, Gergiev is adored. In Rotterdam no criticism sounds, apart from a series of council questions in 2016 by Ruud van der Velden of the Animal Party. The attitude of the Rotterdam college is illustrative, it hides behind the State Department and refuses to take responsibility.

In its own words the Gergiev Festival is ‘an international brand that is synonymous with Rotterdam’. Is it really? Has Rotterdam clung to a radicalized Gergiev and do Rotterdammers let that happen to them? Without a protest sounding? The maestro makes excitement in Rotterdam and polishes his stains away. 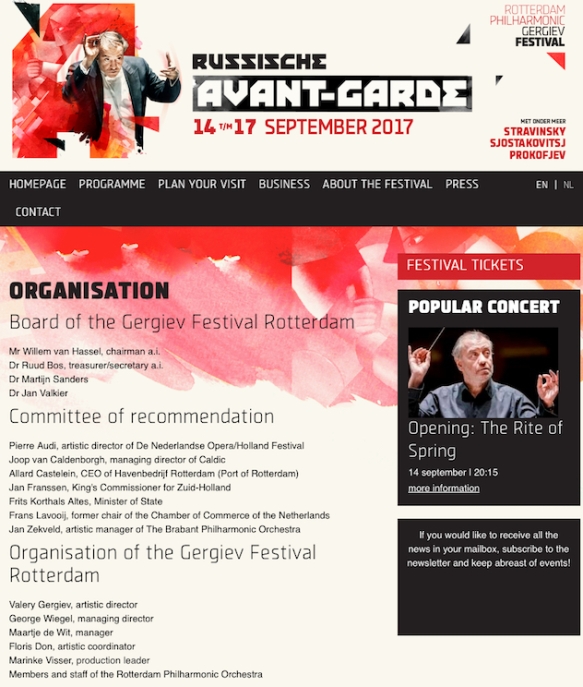 Pictures: Screenshots of the website of the Gergiev Festival; Collaboration and Organisation.